Timetable The timetable for the election will be:

Nominations, which must be in writing and comply with the registered rules of the PFA, may be made at any time from 12:00pm Australian Eastern Standard Time (AEST) 07/11/2018.

Additional forms are available from the Returning Officer.

Prospective candidates and nominators should verify their financial status and any other qualifications required by the PFA's rules prior to lodging nominations.

Nominations must reach the Returning Officer via the lodgement method(s) stipulated below not later than 12:00pm Australian Eastern Standard Time (AEST) on 05/12/2018.

How to lodge nominations, nominations must be lodged via the following method(s):

A properly completed nomination form including all necessary signatures and attachments may be scanned and submitted as a pdf file to qldelections@aec.gov.au

1.     Emails to the AEC inbox that appear to be spam may be blocked. It is the responsibility of senders to ensure that their email reaches the AEC before the deadline for nominations.

2.     In order to be able to be received by the AEC, emails (including attachments) should be no greater than 6 MB in size.

Candidates may submit a statement to be included with ballot material. Only statements which comply with the Rules and are received by the Returning Officer by 12:00pm (Australian Eastern Standard Time (AEST)) on 05/12/2018 can be accepted.

The appointment of scrutineers opens 04/01/2019 and closes 10:30am Australian Eastern Standard Time (AEST) on 04/01/2019. A form is available from the Returning Officer for the purposes of appointing Scrutineers.

You will be sent an acknowledgment of receipt of your nomination by Email.

PLEASE NOTE: It is your responsibility to ensure that your nomination is received by the Returning Officer BEFORE nominations close. 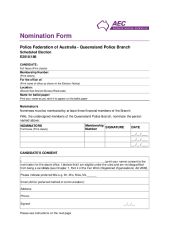